Ricky Rouse Has a Gun 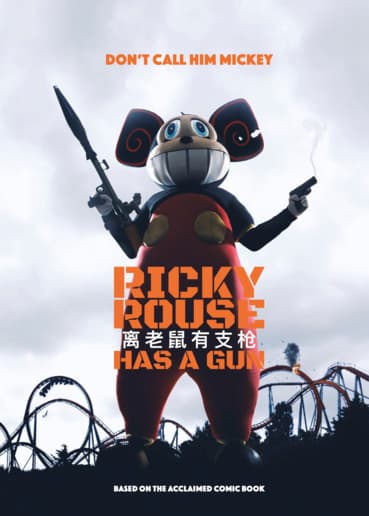 Adapted from Jörg’s critically acclaimed graphic novel, a Boston Globe Book of the Year published by SelfMadeHero, RICKY ROUSE HAS A GUN is an action-comedy currently in development.

It tells the story of RICK, a down-and-out American ex-soldier, washes up in Hong Kong. He finds work at Hucheng World Amusement Park. His job? Greeting visitors dressed as Ricky Rouse, the park’s brand-new all original mascot, the brainchild of the park’s eccentric owner, TONY HUCHENG.

Whilst HUCHENG takes a fatherly shine to RICK, his niece and deputy, JING-WEI, is distrustful of the brash American.

But when on Christmas day, terrorists disguised as Hucheng World mascots take the park hostage, RICK and JING-WEI will have to work together to free HUCHENG and the hostages from the clutches of the terrorist leader RAMBI and her minions: BUMBO the sniper, MISS PIGLET, WOOFY and a host of HYENAS and evil STORMPOOPERS.

RICKY ROUSE HAS A GUN is a furious, subversive and furry action comedy for a new generation.

“I loved Ricky Rouse Has A Gun, a comic filled with deaths and yet full of life.”
Alejandro Jodorowsky

“A story as thrilling as it is bizarre … a true original”
Bianca Bosker, Huffington Post

“…what Ricky Rouse really is, when you get right down to it, is Die Hard in Disneyland. And it's awesome…”
Graphic Novel Reporter